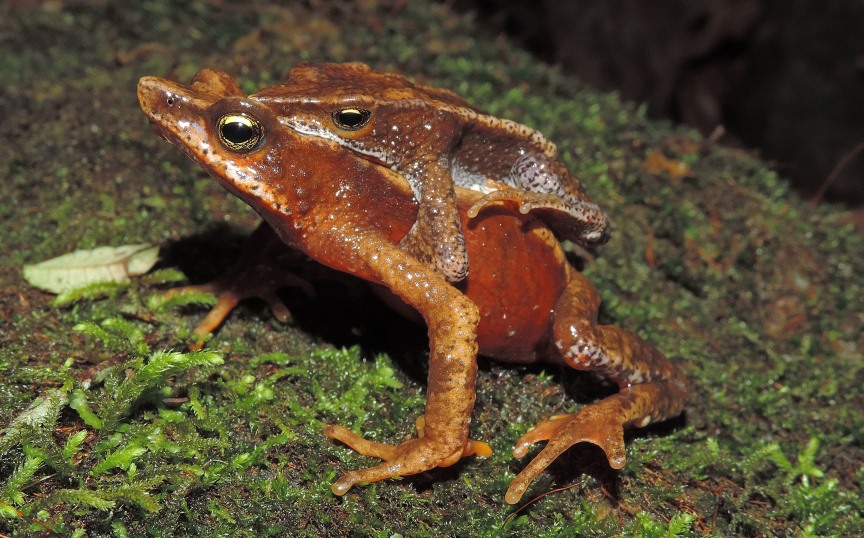 Colombia is one of the richest countries on the planet in amphibian species, according to censuses conducted in the month of July, there is an encouraging abundance of these frogs at El Dorado Bird Reserve.

This Biological group represents an ecologically valuable ecosystem given their importance as bio-indicators of environmental quality, and are key organisms in the ecological dynamics of forests. Unfortunately, in recent years, a special group of these frogs, particularly the genus Atelopus, commonly known as Harlequin frogs, characterized by their striking coloration (aposematic) and their presence in almost all climatic zones from humid forests, mist and paramos, is declining due to multiple causes, including water pollution, deforestation, climate change and the fungus Chytri, a fungus that threatens the world’s amphibians.

Fortunately, two Harlequin frog species are protected in perpetuity in the El Dorado Bird Reserve, Atelopus nahumae and Atelopus laetissimus, endemic to the Sierra Nevada de Santa Marta and listed as Critical Endangered CR by the International Union for Conservation of Nature censuses.

Today, we are advancing detailed censuses in the Reserve to quantify and update the distribution of these frogs and other amphibians endemic to Santa Marta; as preliminary results, we have abundances recorded for the Harlequin frog, Atelopus nahumae; in the space of 3 hours in a ravine 400m long, 10-9 individual Harlequin frogs were found, in the same creek there were 8 individuals of Atelopus laetissimus.

These species use the habitat of the soil adjacent to water bodies and secondary forests and all were observed near areas of high presence of epiphytes (mosses and lichens) and soil with a high presence of leaf litter. On July 18th, we observed two pairs of Atelopus nahumae in amplexus or nuptial embrace.

These abundances, apparently encouraging, make us join our efforts and work as a team with the peoples in the areas surrounding the Reserve to learn more about the demographics and anthropogenic threats that threaten these populations and to generate a future management plan and contribute to the conservation of this beautiful amphibian group approaching extinction.