ProAves is proud to present its Annual Report 2006, summarising the most important achievements of the organization in its work for conservation, research, and environmental education.

Among the principal accomplishments was the establishment of five new Bird Reserves, production and sale of bird-friendly Cerulean Warbler Conservation Coffee, the description of a new bird subspecies of bird, the Yariguíes Brush-Finch (Atlapetes latinuchus yariguierum), and direct environmental awareness of 72,000 people. 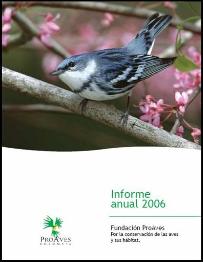 A pdf version of the document is enclosed at the end of this note.

The accomplishments of ProAves during 2006 have been due to the support of many institutions and people, to whom ProAves is very grateful, such as American Bird Conservancy, Fundación Loro Parque, US Fish and Wildlife Service and Conservation International, Robert Giles, Fondo para la Acción y la Niñez, Ministerio de Ambiente, Vivienda y Desarrollo Territorial de Colombia, and the regional governmental environmental agencies.