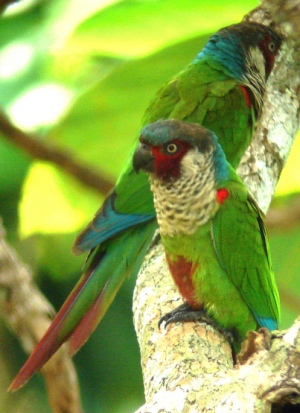 Todd’s Parakeet (P.caeruleiceps) possibly is critically endangered (CR) due to extensive loss of habitat in its range and the possibility of population decline as a result.

Since 2007 in the framework of Project Pyrrhura of the Fundación ProAves, explorations were performed in 22 selected towns with a good representation of preserved forests in the geographical and altitudinal distribution of the species to determine the conservation status of the species and identify the most critical threats. The results were satisfactory in 2007 and 2008, providing the basic knowledge for this parrot, the first step in formulating effective strategies for addressing conservation and research for the same goal.

In the framework of the Pyrrhura Project environmental education activities were held, through the Migratory Bird Festival, visits of the Mobile Environmental Classroom “LoroBus” and dissemination of project materials.